Kayak fly fishing Tillamook in the rain, floods and high winds - but no trout 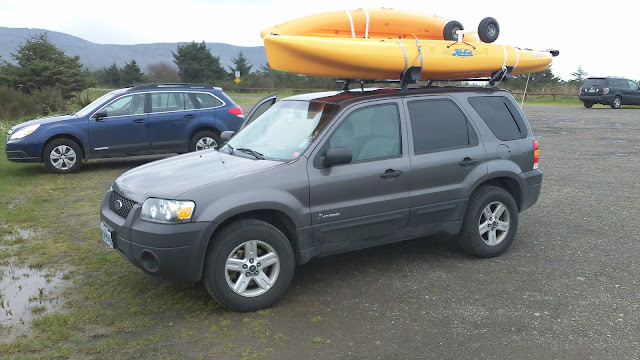 Spring break meant a couple days off and after waiting for the storms to pass, I headed to Tillamook with my son to do some "research."  It's always great to do fishing research and the coast offers many opportunities. Primarily, I wanted to check out some kayak launching areas that I had scoped out on Google Maps, but wanted to see first-hand, especially at low tide. I also hoped to do a little fishing in Cape Meares Lake with the Hobie Outback. I brought along the Redfish 10 hoping to talk Sam into some kayaking. Click here to see the video. 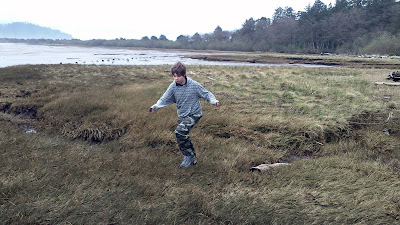 Driving down the Wilson River canyon, the river looked like chocolate milk in a blender - brown and frothy. Although the river was wild, the canyon was spectacular with little waterfalls dotting the canyon walls, adding to the existing torrent. Rain splattered the windshield during the hour drive to Tillamook, letting up only when we reached the west side of the bay. There we were met with stiff winds creating white caps on Cape Meares Lake. We opted for a walk along the bay since kayaking seemed out of the question. When we approached the water's edge I commented on the clam holes and Sam said, "we forgot the clam gun!" adding "We didn't even bring a shovel." Yes, we were so focused on the kayaks and fishing, I completely spaced  we could dig for clams. So, we settled for a nice stroll along the bay seeing if the ground was muddy or sandy and trying to stay somewhat dry. We walked about a mile before we ran out of sand and mud and headed towards shore and the road back.

When we arrived back at the Escape, the wind had died down enough to entertain the idea kayaking in the lake. Sam wasn't in the mood, so I said I at least needed to try fishing. I unloaded the Hobie, geared up and pedaled out.The water was only 7 feet deep at the deepest part. The Humminbird Matrix fish finder revealed nothing, but I didn't expect the beam to be wide enough to find much in such a shallow lake. As I was pulling out the sinking tip line, I heard a small splash on my right and saw the ring left from a rising trout. I looked closer and noticed a dun mayfly on the water. Looking closer, I saw a couple more. A hatch. Things were looking up. I watched as a couple flies floated on the waves but nothing seemed interested. I opted to stick with the sinking tip and woolly bugger, which was one of the flies recommended for the lake. I pedaled around for about an hour and saw only one other fish rise. I knew Sam would be anxious to leave and I wanted to see the water level on the other side of the bay so I pedaled back to shore and loaded up.

We drove to Bay City and checked out the area by the Oyster pile. At low tide there was plenty of water, and the area I wanted to fish seemed reachable with the Hobie, although I did not plan on fishing today. It was time to head home but we made a quick stop at the Tillamook smoked meats outlet store for a little turkey Teriyaki.