Showing posts from August, 2017
Show all

Fly fishing for trout from the SUP at Swift Reservoir 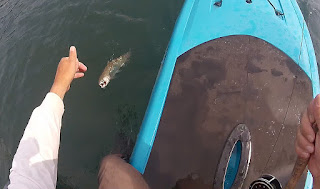 In mid-August, I enjoyed my first SUP fishing trip in nearly a year. The opportunity came up when MAC Executive Chef Philippe asked me to join him at his cabin near Swift Reservoir (check out the video here) Nice trout caught on the SUP. Click here for the video. Swift is always good for fly fishing, especially where the Lewis River drops into the reservoir. Of course having been stocked with 500,000 trout in late April helps. On this trip, since I was only going for a night and Philippe already had his boat in the water, I didn't want to take the trailer and the kayaks and I didn't want to put the Hobie Pro Angler on top of the Escape. As I was contemplating my need for a kayak, I decided I should get the SUP out again. It had spent many months traveling unused on the kayak trailer and it was time to put it back on the water. It was also easy to put it on top of the Escape. I loaded up and headed out shortly before noon and arrived at Swift within a couple hours.
Read more 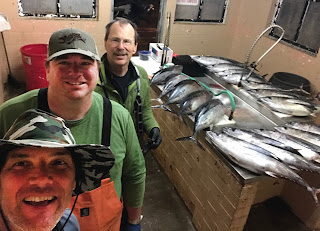 This year's birthday was memorable for two reasons: I caught a lot of fish Everyone on the boat caught a lot of fish Tuna selfie! Like most tuna trips the day started early and ended late. In fact it was a 26 hour day with a 1:30 a.m. wake up call and a 3:30 a.m. crash in the bed.  The opportunity to catch tuna is always questionable because the fish are often miles off shore and the weather can change quickly. This day proved advantageous for us with the forecasted winds showing up late in the day. We started the day slowly with a couple singles caught while trolling. We would try a bait stop and jigs but we were rewarded with nothing. The third fish was a different story and while slowly reeling it in, we fished anchovies and jigs. There are few experiences as thrilling as reeling in a tuna and watching another rod get buried by another tuna. Multiply that and it is chaos with rods bouncing and people reeling in fish.  We picked up a few more throughout the
Read more
More posts