No plastic on this trip - fly fishing the McKenzie 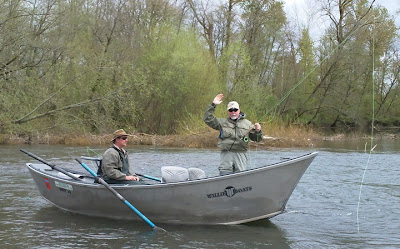 This week I left the kayak at home and enjoyed a special treat when I drifted the McKenzie River outside Springfield, Oregon. An added bonus was fishing with my friend Philippe and well-known McKenzie River guide Aaron Helfrich. The trip was one Philippe and I had tried to make for three weeks, but the record rainfall in March postponed the trip twice.

When the rain finally subsided in April, we found a weekday that worked for everyone and scheduled the trip. The weather was threatening on the drive down and most of the drift. By early afternoon, the temperature started to rise and so did the fish as the March browns and caddis flies did their own drifting on the river. The entire trip was a learning experience because in addition to fishing the river for the first time, it was the first time I had ever fly fished from a moving boat.  Aaron did a fabulous job keeping the boat in the holes or moving at a perfect speed to create a drag free drift of the fly. Many times I was shocked that no fish rose for the fly.

We drifted the lower river between 11 a.m. and 4 p.m. but the fishing didn't turn on until after 1 p.m. Being Philippe's birthday, I let him catch most of the fish but I was able to land four trout between shooting some video and photos. We even had a double while fishing a little eddy just before the trip ended.

I put together a short video that is on my kayakflyangler YouTube Channel. You can learn more about Aaron on his website, www.helfrich.com. His family has guided the McKenzie for more than 70 years and is well known in the area.

I am looking forward to more trips to the McKenzie including some on my kayak. I think I may leave the Hobie at home and use the Redfish since the river has a few tricky areas that are best navigated with a flat bottom kayak.