My 2017 season is filled with ones that got away

December 11, 2017
This year will be one for the books. I was reorganized out of my position in July after more than 20 years, and while taking time to determine my future career goals, I spent time on the rivers and bays fishing for salmon and surfing on my laptop. I can certainly attest to the stability of a Hobie Pro Angler.

Overall, the summer and fall seasons followed a tough spring season where I caught no salmon on the kayak and only a handful while fishing the ocean on Don's boat. The late winter/early spring was great for bottom fish but this year's tuna and halibut seasons were tough. Luckily it was saved by an epic birthday tuna trip in July. I was also able to open up some space in the freezer when I tried my hand at canning tuna for the first time - yes, canned Oregon Albacore tuna does taste that good. 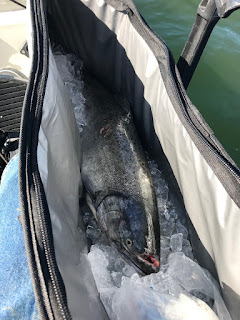 With climate change, the salmon seasons are also changing and the fish seem to show up later. This was best exemplified by the emergency regulation change on the Willamette and Columbia rivers when the spring Chinook run looked as it if wasn't going to show at all. The fish finally arrived late and actually exceeded the forecasted run, although not by much.

Once August arrived, I was back in the rivers searching for fall kings. The season started with a bang as I hooked and lost a nice king near the mouth of the Lewis River. This was the theme for this season as I lost several on the rivers and in the bays. At one point I was extremely frustrated until I reminded myself I am blessed to even have an opportunity at such majestic fish.

As mid-December nears, there are still fresh fish in Tillamook Bay and one of those was my first kayak-caught salmon in the bay, when I landed a nice wild coho the first week of December. I am looking at another trip later in December if the weather holds. If everything works, a fresh king salmon would be a great Christmas gift.

Here is my list of highlights for the 2017 salmon seasons:

The season officially ends December 31 and if I catch my Christmas present, I will certainly tweet about it.

Trolling for kings on the Willamette. What a wet winter it has been. This is an obvious statement to anyone living in Portland this past winter. Record rains, snow and cloudy days are actually normal for Oregon and since the past couple winters and summers were relatively dry I suppose we are experiencing the swings that create the "average." What seems to be missing in all this water are fish, especially spring chinook. The counts have been low on the Willamette and Columbia and the fishing tough. At least for me. I have plied the Willamette for several days with not a single bite. The only solace in my efforts is that I haven't seen anyone around me catch a fish either. In fact, I have yet to see a single salmon caught this year. That's not to say they aren't being caught. Several of my fellow kayakers have posted happy selfies with big fish. I have not lost hope. In fact I expect the high water is causing the run to be late and by May and June, my lu
Read more