A wild ride with a wild steelhead 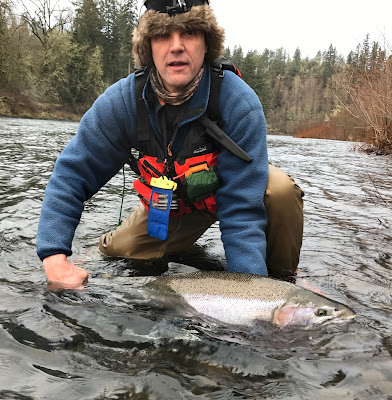 I consider fly fishing for winter steelhead an optimist's sport. During my many years of chasing these fish from sleds, drift boats, on the bank and more recently from the kayak, expectations of catching one on a fly are low. Of course, if catching fish were a requirement for fishing trips, they would be called "catching" trips.

With this in mind, I was looking forward to my first winter steelhead trip of 2017 more for the company and as a way of scouting a section of river in a drift boat before taking the Pro Angler.

Steve and I arrived at the launch as the faint light of winter morning was fast pushing the darkness aside. Pulling away from the shore, we could barely see the water - and the obstacles in front of us. We talked as we drifted through the long run towards the first rapid. Steve rowed into position and we dropped through the rapid. It was short and we floated a minute before Steve slowly guided the boat to our first stop. We rigged up the rods as the sun turned the edges of the clouds a deep orange.

This first run was new to me so Steve took lead. We talked for a while as he fished, needing to get some distance through the run before I followed. He stopped talking for a moment and stared at his line. "I just felt a fish," he said. He let the line hang in the current for a few seconds longer before casting again. I headed back to the boat, grabbed my rod and started at the top of the run. I was a third of the way through when Steve walked past me to the boat saying he was going to change rods and follow me through the run again.

The run was about 80 yards long but a deep side channel bordered by a steep cliff cut it in half. The channel also eliminated any opportunities to chase a hooked fish downriver. Even if you could chase a fish, at the end of the run was a shallow rapid that, if the fish chose to run, would dash any hopes of landing it.

This was also not a classic steelhead run. The side of the bank dropped away to a wide, deep slot that shallowed up to a bench before dropping again into the main river. I was now at the middle of the run, casting the spey line farther and farther into the main river with the line crossing the bench and into the hole. I was feeling good as the leader occasionally touched the bottom.

I watched as the line swung across the bench when suddenly it went tight and the rod bent. The short loop of running line in my left hand was taken and my old Pflueger 1498 let out a short scream as it gave up more. I was following my line downstream when the middle of main current upstream suddenly exploded. I had only experienced this on the Dean River - the fly line is downstream but the fish is upstream. Of course this situation was short lived as the rod was now deeply bent and my reel screaming loudly with the running line being followed through the guides by the backing. This was a big fish.

"Fish On" I yelled at Steve and within seconds he was out of the boat and next to me with the net. We were both smiling.

Clackamas fish are typically about 7 to 8 pounds with an equal mix of  wild and hatchery fish. This fish was much larger and likely wild. Several times I looked at Steve and said "I can't do anything with this fish." I knew that until it was tired, the fish was in control.

More than once it headed towards the lower rapid, threatening to spool me, only to stop short and come back into the main run. At one point, the rod was bent but not moving and I thought the fish had wrapped the line around a rock. Steve said he didn't think so and I gently applied more pressure.

There was only so much pressure I was gong to put on the 10-pound tippet, especially because there were three knots on the tippet and I didn't remember how long ago I tied two of them because I hadn't used the spey rod since last fall,

The rod started to bounce again and I was back into the fight. By now the fish was getting tired and I was gaining line. Soon the fish was close enough to see and both Steve and I gasped. It bolted when it saw the net and the reel gave up more line but the fight was ending and unless something broke or I did something stupid, we were going to net this fish.

When Steve finally brought the net up with the fish inside, we were looking at a bright, wild buck steelhead nearly a yard long. It was lifetime moment and we gave each other a high-five, taking a few moments to admire the fish.

We never took the fish out of the water knowing our next goal was to get the fish unhooked, revived and returned to its primary objective of passing along its genes.

The fly was a black leach pattern about 2 inches long with a trailing hook. Half of the fly was hanging out of the corner of the fish's mouth and the hook was firmly in the bottom of its tongue. This fish was well hooked.

To make it easier to unhook, we broke the tippet tied to the fly and I used needle nose pliers to remove the hook. We took photos being careful not to lift the fish completely out of the water. I let the fish rest and recover carefully holding it in the slow current.