The Hobie is fixed, my rash is gone and I caught some trout

May 13, 2012
First a quick update on the boat. The fix worked and boat is not leaking. I am fairly certain it will hold since I have spent more than 30 hours in the kayak since I fixed it. Regarding the rash, I switched to my breathable waders and the rash is no longer and issue. When the cold weather returns, I should have calluses. 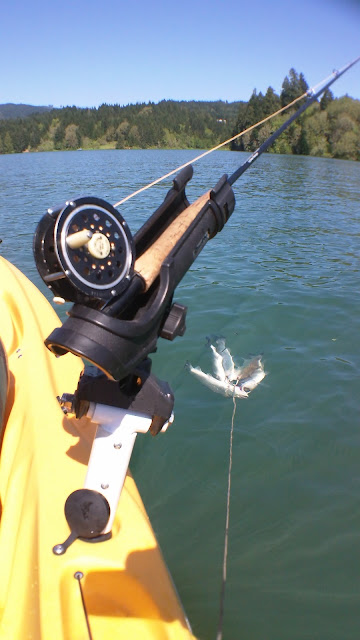 Now to the important topics. I have spend many hours since my last post fishing for spring salmon in the Willamette River. With the water visibility at less than 20 inches I spent significant time trolling herring with a flasher. In the main river, the closest I got was when I reeled up my line and the herring had bite marks. A couple of my boating buddies landed fish so I spent a day in my sled trolling herring and spinners but that proved pointless as well.

On every trip, my 12 weight, the Deep Water express tips, and a variety of large flies accompanied me and were tried in rotation with the bait. One day, that included a short incoming tide (I always try to fish the outgoing), I brought  my 7 weight to try for bass during the incoming tide. I went into some good bass water and started marking fish on the finder suspended at the 15 to 24 foot level, the depths salmon typically hold. I turned the Mirage Drive around and trolled a big woolly bugger in reverse over the fish and wham, the rod jammed down, I felt the head shake and then nothing. After the customary swear words, I reeled the line in and discovered the 12 pound tippet had snapped - I am not sure it was a bass. I spent another hour trolling the water but nothing. I returned twice more and included the area in my salmon routine but even though I was marking fish, I was unable to get another bite.

The day before Mother's Day I was faced with trying for salmon again or heading to Hagg Lake for some stocked trout. I woke up at 6 a.m., and decided to go trout fishing. It proved a good choice. After fueling up on coffee and yogurt, I arrived at the lake before sunrise and only a handful of anglers were at the dock. I launched and headed to the area I heard had fish. After 20 minutes of pedaling forward, I turned the Mirage Drive around and spent the next four hours trolling backwards. I had marked nothing on the Humminbird finder since I left the dock but I was rewarded with a fish within minutes of beginning to troll backwards. About 20 minutes later I caught another but still nothing on the finder even after I increased the sensitivity. The thing I did notice was that I was not only getting bites, I was able to keep the fish on, something I struggled with in my paddle kayak. I landed another trout before a long spell of no fish and no bites. I worked my way over to another area and the finder started marking numerous fish at the 5 to 10 foot level. Most were small but I trolled through and the finder proved it was able to reveal fish. I caught a 10 inch trout and got several more bites. Then the finder let out a loud beep and a large fish came onto the screen. I trolled over the fish and soon after the rod jerked, a fish jumped and I was into a nice trout. I coaxed it to kayak and as I was about to net it, the fish bolted and peeled line and eventually threw the hook. After the customary curse words, I returned to trolling and caught three more, including a nice 15 inch trout, before calling it a day. You can see the video on my YouTube channel by clicking here.

I kept five fish because I have discovered I like smoked trout. I pedaled back to the dock and pulled out of the water just as the hordes were lining up at the ramp. The day proved very productive and I have become comfortable pedaling the Hobie backwards, the main reason I wanted the Hobie. As the Willamette warms and clears this week, I will be back on my quest for a springer on a fly from the kayak.
drive hagg lake henry hagg Hobie humminbird hummingbird kayak kayak fly angler kayak fly fishing Kayakflyangler Mirage Outback salmon trout