An epic day on the Deschutes as I stay on shore. 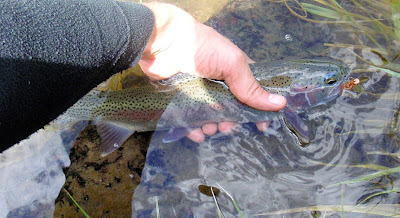 For many years, I have wanted to fish the storied Deschutes River salmonfly hatch. Usually this occurs in mid to late May around the Memorial Day weekend, depending on the weather.

This hasn't worked  for me because I avoid travel during long holiday weekends. When I was younger and had less vacation time at work, these were weekends when my wife and I would hit the road camping wherever we could. I have many memories of grabbing the last camping site in the campground or making due with very little space to pitch a tent. Back then we would spend most of the time hiking, fishing or traveling to our destination so sleeping wasn't critical. 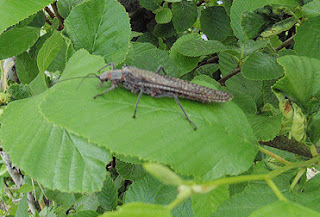 These days I am quite happy to do day excursions and enjoy a bottle of wine or beer at home visiting with family or friends who also avoid travel during the holiday weekends.

When I was putting together one of these day excursion, my friend Jim and I decided to check in on Sunday to see how the various fisheries were shaping up. My struggle is there is so much water to fish. It's hard decide where to go: take the sled up the Clack or on the Willamette or Columbia, fish the coastal rivers, take the kayak on the Willamette or perhaps a lake. Fish for trout, salmon or steelhead. Too many choices.

We opted for the Deschutes since Jim had a spectacular day recently. The idea of finally fishing the salmonfly hatch was the closer. Monday morning we headed for the river, stopping at the Fly Shop in Welches to pick up a couple flies and some advice. When we arrived, it was a pleasant surprise to see the crowds were manageable and many people were driving out or packing up. 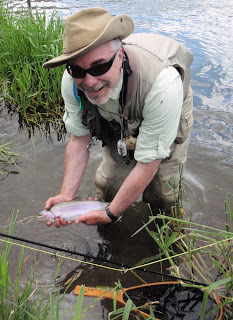 It was late morning when we walked onto the first stretch of water. There was little feeding action on the surface but there were a few bugs on the shore. We opted for our standard stonefly imitations hoping to entice a fish. I tossed my fly in nice pocket of water and after a few casts, a fish swatted at the fly but wasn't willing to commit. I had another do the same and commented to Jim and I thought the fly wasn't quite what they were looking for. I decided to modify the foam head a little. That seemed to work and for the rest of the day, I was catching fish.

We spent several hours in the same area rotating around the different pockets and enticing fish. Jim landed the largest fish of the day on a yellow stonefly imitation that I couldn't replicate. After we exhausted the hole, we headed downstream and picked up fish all along the way. My best stretch included three nice trout in 15 minutes all from various distances from the shore. 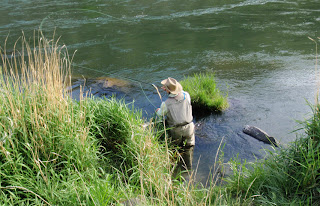 My most memorable fish was above a corner between two trees. I had lost one of my flies in the downstream tree and half my leader stayed with the fly. I took a few minutes and built a fresh leader. As I was building it, several fish upstream were feeding on flies that were blown onto the water with the wind gusts. I finished my leader and tied on a size 12 stimulator. I then turned on the video camera, stepped into the water and captured a perfect three minutes of video from spotting the fish, casting, hooking the fish and finally landing and releasing it. All in one take.

All in all, it was an epic day on the Deschutes. To see the videos, click here. Now if I can just figure out how to get the Hobie on that water safely...
Deschutes fishing fly fly fishing fly lines flyfishing hatch kayak fly angler kayakflyangler.com May river salmon salmonfly stonefly trout