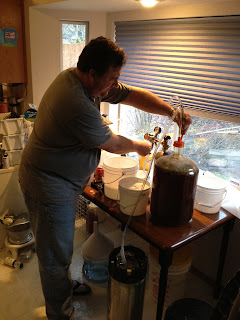 When the rivers are blown out from too much rain and I am feeling in the dumps from a lingering cold, it's time to do something fun. That something was smokin' salmon and brewing beer.

The first is something I have done several times with some good success. The second is something I know little about and wanted to learn. Of course, both have wonderful rewards and really take about the same amount of time for success. On the fish side, the salmon and trout I was smoking were caught the previous summer. I also spent the previous 24 hours preparing the fish with a dry mix of organic brown sugar and Kosher salt.

The beer, or rather a wort, is prepared in a little less time than it took to smoke the fish. Once the wort is finished, it ferments and ages a month or more before it is ready to drink. My guide for the brewing process was my buddy Kevin who is a great salmon fisherman.
He is also a great brewer and after evaluating a production IPA and a local amber ale, Kevin opened his fridge and shared his Jubelale and double IPA. Both were great and I needed to watch my intake to make sure I was not impeding my body's attempt to get rid of the remnants of my cold.

The best discovery of the day was that fresh smoked fish and homebrew go great together. And, I am looking forward to enjoying a pint after a (hopefully) successful day of kayak fishing which will continue the cycle of brewing beer and smoking salmon.