Ok, that's a cringe but accurate. 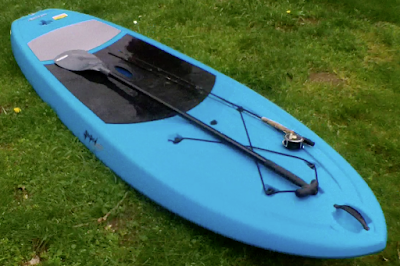 I recently bought my first SUP and I am onto a new experience and project. The goal is fly fishing on the SUP in a variety of situations ranging from small lakes to large rivers. Ultimately I want to catch a steelhead or sturgeon from it.

The board, a Lifetime Amped, cost only $240 with a paddle - an excellent deal from Dick's Sporting Goods. It has a some scratches and the foam decking has bubbled in a few places but overall, it's a cheap intro to a SUP.

It is 11 feet long, weighs less than 50 pounds and includes a small drop-down rudder or fin. It's hollow and seems to have a well designed hull.

My first trip was to Benson Lake, really a pond, in the Columbia Gorge. A few days before the trip, I read it had been stocked with trout. If true, the lake offered me a chance to catch something on my first SUP trip.

Since in was early April, I put on my dry suit and PFD for safety. After gearing up, I easily carried the board to the water, jumped on and carefully paddled around. With no wind, the board was easy to maneuver and fun to paddle.

I could stand up and sit down fairly easily and overall I was comfortable on the board. I tried casting the fly rod and again felt comfortable. The main problem was not having a safe place to store the fly rod while paddling.

I fished for about 45 minutes with no luck. I didn't even see a fish rise. For the next hour, I paddled around and changed my position from sitting down to standing and then sitting again.

While paddling, I noticed the board would not stay straight unless I alternated my paddling from one side to the other. During some small gusts of wind, I became a sail and felt less stable.

Soon, my core muscles were feeling the workout.  I headed back to shore, got out of the suit and loaded the SUP on my Escape. If I master this skill, I thought to myself, I can easily take the SUP to work and get some fishing in during the evening hours and work on my steelhead and sturgeon goals.

Until then, my next steps include adding pad eyes, a seat, rod holder and hatch. The hatch is the most risky because it requires cutting into the hull.

Look for upcoming posts as I try SUPin' New... I just had too.