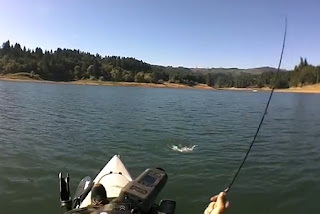 Note - wow did this take a long time... Launching the Hobie boats went well and Michael, in the Outback, quickly adapted to the boat and pedal action. We cruised toward one of the creek inlets that usually produce fish.The early conversations with Michael included my fly recommendation which were woolly buggers and leach patterns. About 100 yards from the ramp I turned the pedals around, made sure Michael was comfortable and had his line out, and started to fish. I was quickly on a nice sized trout and the day looked promising. In the next hour I hooked three more trolling my go-to green woolly bugger in reverse. 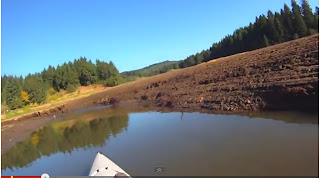 My goal was to fish the stream inlet where I had first pedaled the Hobie in reverse.
As I got closer to the inlet I realized how low the reservoir was. I made my way up the inlet until the water started to show signs of movement. It was the same location where I could no longer pedal the kayak so I took out the paddle, used it to turn the kayak around and got back to fishing. I headed to the side of the reservoir opposite the ramp, trolling the woolly bugger and getting very little action. I switched flies to a simple green leach pattern that worked well at Harriet Lake, and my catching improved. After boating a couple more trout, I saw Michael and peddled over to see how things were going.

He had a big smile on his face and obviously he was having a good time. He said he had switch to a dry fly, his preferred method of fishing, and was having some success. While explaining the fly he was using, Michael showed off his balance skills by tipping up the Outback to nearly 60 degrees before settling it back on its hull. I am not sure that was planned but he did a masterful job of keeping calm.We kept fishing for a couple more hours catching several nice trout.
By mid afternoon I was thinking how great it would be to catch a bass for the Heroes on the Water Tournament but had doubts I would. Those doubts were eliminated when I trolled close to the shore in a little cove and caught a little small mouth. I would later find my fish would not even be in the running so the choice to spend a couple more hours fishing rather than heading back to the Next Adventure paddle center proved a wise one. 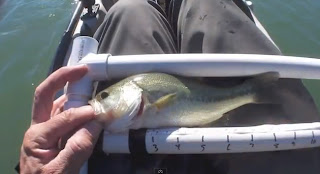 In the last hour, while heading back to the ramp I had strong take that jammed the rod into the water. Unfortunately the fish quickly threw the hook, but it felt like the biggest fish I had on that day (of course the big ones always get away). By late afternoon Michael and I were loading the kayaks on the top of the Escape and packing up. Right before we left, I turned on the camera and asked Michael if he enjoyed the day.
All I will say is is watch the video - he did have a great time. I have been on several more fishing trips, including a couple to Hagg, but you will need to check out my YouTube Channel to see how those went. In the future, I plan on keeping the blog updated - if I only had more time or was paid for this...
angler drift cameras fish finders fishing fly angler fly fishing flyfishing gopro hagg lake hatch henry hagg Hobie humminbird kayak fly angler kayak fly fishing kayakflyangler.com kayaking Kodak mirage drive