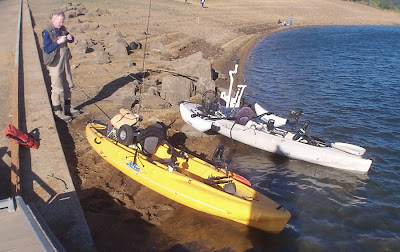 I returned to Henry Hagg Lake but this time I took musician Michael Hoppe on his first kayak fly fishing trip - and he wants to go again. I was talking with Michael a few months ago and he was lamenting the fact he had not fished a lake in Oregon. He had fished a few Oregon rivers but was wanting to get on a lake and in a float tube. I told him I could do better than a float tube and promised to take him out in the kayaks. He looked skeptical but said he would give it a go (see the video here).

We emailed a few times to determine which lake and after suggesting Lawrence, Trillium and Hagg, he chose Hagg. I was a little concerned since Hagg is not nearly as pretty as the other two but it had been stocked recently so I figure we would at least have a chance at catching fish. It was the same weekend as the Next Adventure Kayak Bass tournament. I had suggested Michael and I enter the tourney for fun, but he was not interested.

After choosing Hagg, I toyed with the idea of entering the tournament since the lake had bass and the weigh-in wasn't until 5 p.m. Plus, the proceeds went to Heroes on the Water, a wounded warriors type program that helps vets get on the water and fish from kayaks. On Friday afternoon, I decided the $15 would be well spent and signed up. When I checked in, I was given a stainless steel water bottle, a couple stickers and a tournament marker for the photos and the promise of a barbecue that started at 5 p.m. If I caught a bass, I would talk Michael into leaving early for the weigh-in.

At 7:30 a.m. Saturday morning, Michael and I loaded into my Ford Escape Hybrid and headed to the lake. I knew Michael was a musician but was unsure what type of music he composed so after a little searching on the Internet, I discovered we was quite accomplished and his work was featured in movies and television shows as well as performed around the world. This proved a starting point for some wonderful conversations on the trip to the lake. Our conversations also wandered to photography and I discovered his grandfather was a famous photographer with an interesting back story. We soon found ourselves looking at a very steep boat ramp and a water level nearly 20 feet below last spring's levels. We unloaded the kayaks and gear, parked the Escape and prepared to fish. to be continued
fish finders fishing fly angler fly fishing flyfishing gopro hagg lake hatch henry hagg Hobie humminbird kayak fly angler kayak fly fishing kayakflyangler.com kayaking mirage drive