Fish, Cameras, Action - Four is Better than One 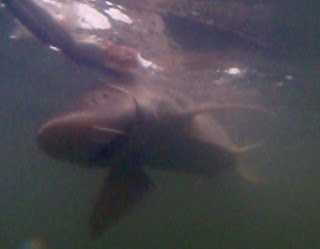 I rarely am ever satisfied with my hobbies and I am always trying to make things complex and interesting. When I first started kayak fishing, I took a very basic Old Town Otter and transformed it into a complex boat that helped me take third place in my first kayak fishing derby - which took place while the Willamette River was nearly at flood stage.

Needless to say I was totally hooked and the next weekend I bought a real sit-in fishing kayak. I tricked it out, bought another, modified it (I still have it) for fly fishing and sold the sit-in. The Hobie Outback is proving to be my favorite ride so far and I keep modifying it as I continue to explore kayak fly angling. 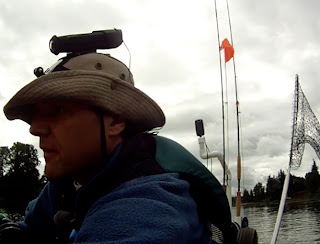 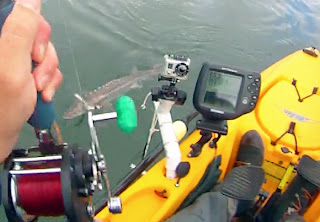 My current obsession involves shooting video while fishing on the kayak. Of course I started with one camera (an Olympus Stylus 1030), and shot some great video and stills. I then borrowed the GoPro Hero my wife had. I then decided I need to capture audio so I bought a Kodak PlaySport and added the wide angle lens. Recently I added the Drift HD170, because it has a real audio input. Of course I also had to get a microphone and adapter. I then decided it would be great to have different angles of the video I shoot. So, I built three video mounts, including one for underwater video, out of pvc and various other materials. I also built a custom head mount for the Drift.

Running that many cameras is complicated, especially if I want to capture the action, which is not always planned while fly fishing. I decided to do a test and I needed a fish that was easier to anticipate the catching process. The sturgeon was the obvious choice. This is because the fish bites for up to a minute allowing me to turn all the cameras before the action begins. I was able to find some good talent that worked for smelt, and the test proved successful, at least as far as the video recording. I have edited the film and it is now available on my YouTube Channel, kayakflyangler, or you can click here.

Let me know what you think. I plan on expanding my film subjects and adding on-water commentary in addition to the thematic music. And, if any video companies wants to send me cameras to test, I am more than willing.

My current cameras include the Drift HD170 (on my head), the Kodak (behind me), the GoPro (next to the fish finder, and the Olympus Sylus (the underwater shots).
camera cameras drifthd fly angler gopro Hero hummingbird kayak kayak fly angler kayak fly fishing Kodak Mirage Olympus Outback sturgeon video willamette