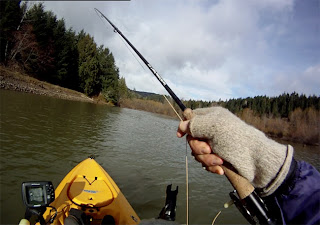 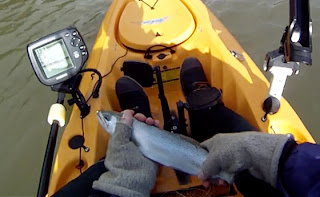 When I was looking at the Hobie kayaks earlier this year, one of my primary goals was to use the drive to pedal backwards while fly fishing in the kayak. From the first time I fly fished from my little Otter kayak, I realized kayaks offered the potential to fish water unavailable to the those in float tubes and pontoon boats, the type of personal boats most fly anglers use.

The primary advantage of pontoons and float tubes is the ability to  keep tension on the line when a fish grabs the fly (I talk about this in an earlier post). At Henry Hagg lake outside Forest Grove, I had my first opportunity to really test the mirage drive in reverse. I was quickly rewarded with a beautiful wild fish. You can see the video at my YouTube channel by clicking here.

When I caught the fish, I was able to feel the take immediately, keep tension on the line and feel in control of the boat the entire time. The drive easily fit the slot in the kayak but I had to reverse the pedal settings so that I was on 1 instead of 6. The rudder also worked in reverse since it was now in the bow instead of the stern. However, it worked well and controlled the boat.

Since I was in the mouth of one of the streams that fed the lake, I was able to really test my ability to control the boat with some current. I discovered that it was indeed possible to steer the boat and actually pedal against the current and go upstream. This is very exciting because I can now start experimenting with backtrolling in the Willamette and lower areas of the Sandy and Clackamas rivers. Stay tuned for more adventures.
fishing fly fishing Hobie hummingbird kayak kayak fly angler kayak fly fishing Kayak fly fishng Kayakflyangler Mirage Outback

Unknown said…
so do you just cast out your fly line and troll backwards? and have you changed the location of your rudder to the front of your kayak?
November 10, 2014 at 6:56 PM