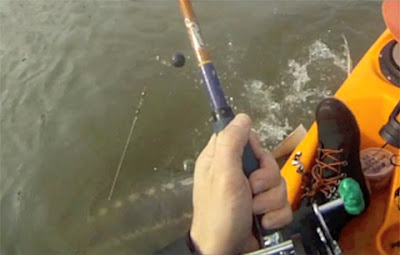 When I tell people I fish for sturgeon from my kayak, most say I'm crazy, but everyone asks if I get towed around when I catch a fish. My standard reply is "most sturgeon are not big enough to tow me around." A recent trip changed that reply. The day was planned and I was going to shoot some footage for the blog and work on my kayak fly fishing research. I also wanted to test the new anchor system I found on the Northwest Kayak Anglers web site. I picked up some shrimp, and loaded the equipment onto my Ford Escape and headed to the river. I had my fly rod, as well as the bait rod, the scent and other items I needed to do some tests. I paddled to a location I had caught fish before and tossed the anchor and, with the new anchor system, the rope bag and a float. I would soon be thankful I had this system. I tried bait first in 60 feet of water under the boat. Nothing. Then the anchor slipped and I found myself 30 feet downstream before I could get it set again. I tossed the bait in and this time I had a bite within 10 minutes and a shaker came to the boat. I decided to try the bait again before working some scents on a fly and was quickly rewarded with another fish. I soon realized it wasn't a shaker and I found myself with a much larger fish on the end of my line. After fighting the fish for about about a minute the strangest thing happened - I started reeling in line and for a moment I thought I had lost the fish but instead the sturgeon came up, swiped at the boat and then dove deep as line peeled off the reel. The next 20 minutes were some of the most exciting I have had on a kayak. For the first time I had to go off anchor as I was towed all over the river by a sturgeon. I finally brought the fish next to the kayak and released it, unfortunately by cutting the braided leader, fearing that it could possibly roll the kayak. I guessed the fish at 5 to 6 feet. During a trip to the Sportsman Show the next day, one of the guides said if you can get a sturgeon to roll over on its back it will remain calm long enough to get the hook out without any trouble. Next time I will try that. Of course, if I had another person nearby, I would be less concerned with falling in. Overall it was fantastic day. To see the video, check out my YouTube Channel, Kayak Fly Angler
fishing kayak kayak fly angler Kayak fly fishng Kayakflyangler